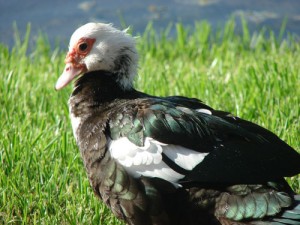 In the newsletter two weeks ago, I wrote about heirloom poultry – specifically chickens. Chickens are often the homesteader’s main choice of egg layers and meat stock. However, there’s another bird you ought to consider raising, and that’s Muscovy ducks.

It’s true the Muscovy is not a beautiful bird. In fact, he’s a downright ugly duck. But this animal is a hidden goldmine, no matter how funny he looks. They are wonderful foragers, excellent mothers, VERY fertile, disease free, self reliant, and tough as nails. The Muscovy Duck is the only breed of domestic duck that didn’t originate from the Mallard bloodlines. Instead, they’re a perching duck from Central and South America that were domesticated before the first European colonists arrived. The colonists were so taken with the qualities of these ducks, they took them back across the pond with them.

They are also one of the few ducks that have both dark and white meat – if you’re interested in putting a few up in your freezer. Unlike the Pekin duck, (the universal industrial duck bred on commercial farms), the Muscovy is not fatty and is in fact, quite flavorful.

The Muscovy is an opportunistic little eater; if you’re not careful, he’ll eat you out of house and home if your only intent is to feed him commercially prepared food! The Muscovy will make his home in most any habitat – from pastures, to woody areas and underbrush, to rivers and ponds. They’re ferocious on insects and animals, eating more than their fair share of mosquitoes, flies, spiders, beetles, worms, slugs, frogs, moles, mice and much more. This makes them the ideal forager for keeping those pesky garden slugs and bugs at bay, as well as eating those critters that infect your livestock, like the liver fluke worm. If you plan on breeding these ducks, you have to be careful. They are prolific breeders! A hen can realistically raise three clutches of 12 to 15 young two to three times a year, depending on the climate. And they are quite peaceful animals in regard to other farm animals. They only maintain a strict pecking order amongst themselves. In addition, they are quite cold-hardy and adapt easily to most all climates in the United States.

The Muscovy is another “heirloom” that will enhance your efforts to live a self-sufficient lifestyle as you succeed in moving yourself “off the grid”!

Previous: Which States Will Go Bankrupt First?
Next: How to Build a Solid Survival Plan