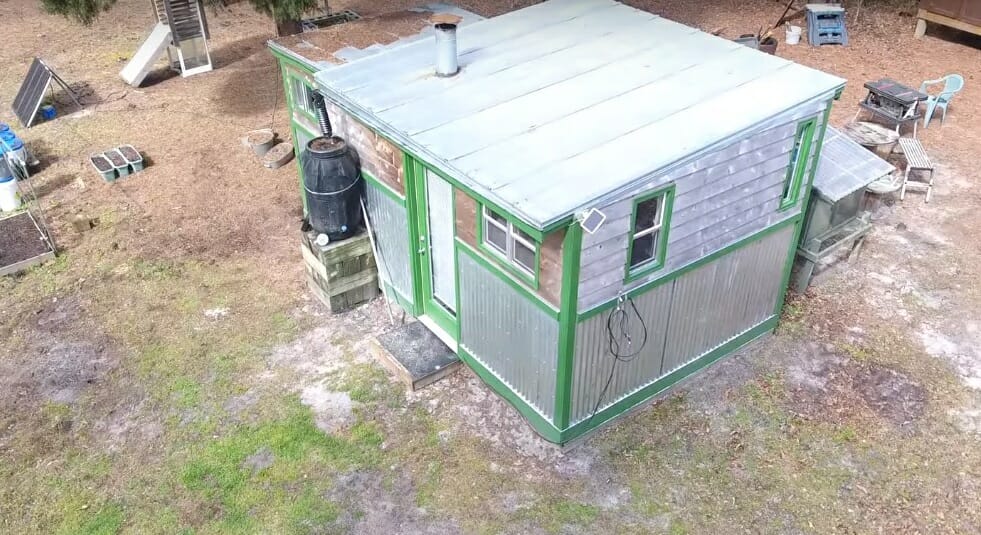 If you have been wondering about living a self-sufficient lifestyle in a tiny house, you may want to check out a new video tour of such a home in Eastern North Carolina.

Jeremy Clemons designed and built his cozy $4,500, 160-square-foot home himself, and it is an evolving work in progress. He is working on the door for his stall shower, and he says he is on his fifth revision of the home’s interior set-up, including the placement of his queen bed in the tiny house. Right now, the bed is set up several feet in the air, allowing plenty of room for storage underneath.

Jeremy grows much of his own food in a garden outside his home. He gets power from solar panels and from three marine batteries. A large woodstove dominates the home, and he admits it puts out more heat than he needs. Jeremy says that the foam board insulation in his walls helps the home retain heat and that his inside temperature is often 20 degrees above the outside temperature in the winter without use of the woodstove.

A pitcher pump brings water into the home, and Jeremy has rigged his own simple water filtration system that feeds water through gravel, coarse sand and then fine sand before it is fed through a Sawyer filter for the final purification step for drinking water.

The bathroom area has a composting toilet that makes use of sawdust and wood ash. Water for the shower comes from a five-gallon bucket set up in the stall. Jeremy says he only uses about half the water in the bucket when he showers.

In his small kitchen area, Jeremy prepares simple meals that don’t involve much more than heating and boiling. He uses an outdoor grill for meats.

To keep his building costs low, Jeremy obtained free galvanized roofing materials from an outbuilding on his grandfather’s farm, and he was able to obtain his windows for free or for low cost.

“I thought about going the trailer route,” Jeremy says, adding that he decided to build a home since he had his own land and knew he was going to be there a long time.

To share what he has learned, Jeremy has created a program designed just tiny homes that can help you determine what you can build with your specific budget in mind. Visit TheTakeOffDoctor.com for more information.

Have you ever wanted to live in a tiny home? Share your thoughts about tiny homes in the section below:

Previous: North Korea Warns: ‘Nuclear War May Break Out Any Moment’
Next: The 5 Best Livestock For Beginning Homesteaders