The Underground, Hidden House That Cost Only $100 To Build — ‘It’s Like A Little Fort’ 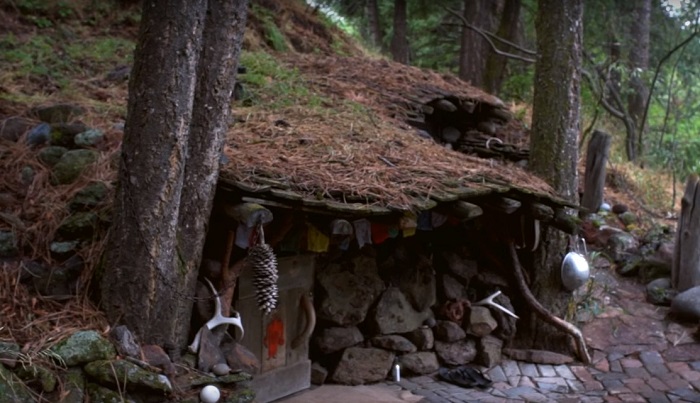 A professional news photographer for 10 years, Price says he began his search for a simple lifestyle back in 1990. He found what he was looking for when he discovered a two-acre riverfront property for rent in Joseph, Oregon. For $100 a year, he enjoys a meadow, a spring, river access and the several tiny buildings and dwellings he has created over the years.

“I have wanted to do this since I was 12 years old,” says Price in a YouTube interview with Kirsten Dirksen. Fascinated with books like My Side of the Mountain and The Hobbit, Price says that he built a log cabin when he was 12 and knew that he “never really wanted to be an adult.”

“When you are a kid there is no stress,” he explains. “Security is a myth. You can get hit by a car tomorrow. If you don’t worry about security, then your life becomes way more adventuresome.”

After living three years in a teepee on the picturesque property in western Oregon, Price lived in a tent for several more years before he decided to build a square wood building that he describes as a “beach shack.”


When thieves broke into the house and stole his photography equipment, however, Price took the structure down and decided to live in a circular underground dwelling he had created behind the building.

Since then, he has stayed put in his self-proclaimed “hobbit hole.” At night, deer walk on his roof.

“It’s like a little fort,” he explains, adding that he likes to build small things. He leaves his shoes on a mat by the doorstep and crawls through a hobbit-like front door. The main room features walls and ceiling built of pine and a large skylight that can open for ventilation.

Price is quick to point out that his home stays cool in the summer and is easy to heat in the winter.

“When it is 30 degrees [Fahrenheit] outside, it is 50 degrees in here,” he says, explaining that a small ceramic heater is all he needs to bring the inside temperature up to 65 degrees. “In the summer when it is hot outside, it feels like there is air conditioning in here.”

Price reaches his bedroom though a large circular hole in the wall. The cozy-looking room features some of his artwork and photographs, a window that can serve as a door, a bookshelf and a two-inch mattress on the floor.

Even though he has few belongings, Price admits that he is always looking for ways to have even less. Pointing to his small stack of clothing, he says he has “way too many shirts,” for example.

He cooks very little – maybe a can of soup or some rice now and then – relying on a diet of raw fruits and vegetables and grains. Instead of using a table, he places his meal on a cutting board set across his lap.

Price applied for and received city permits for electricity to his underground home and for the composting outhouse he created on the property. “I was kind of grandfathered in,” he admits, “but I keep things really pristine, so no one is complaining.”

Price gets his water from a spring on the property and from the river. He built a sauna and a shower structure near the river, and he has a separate underground studio, which he built entirely from wood and bricks that were set to be thrown away by builders. He estimates that his studio cost him about $100 to build, with the cost mostly coming from the skylight in the center of the ceiling.

He says he was influenced in his home and studio design by his visits to kivas in the Southwest. “I decided that was how I wanted to live,” he says of the Pueblo Indian architecture.

The studio houses Price’s collection of the 77 issues of Moonlight Chronicles, the magazine he published for about 20 years that offers details on his life, his travels and his philosophy. He no longer publishes the magazine, which was sponsored by a shoe company, saying that his simple lifestyle affords him the opportunity to live his dream.

“I like the idea of not having any furniture and of having a (living) space so small. When you think about the space you live in – you eat, you sleep and you read a book — you don’t really need a big house.”

He says his ideas for a pared-down way of life came from books and from his days of backpacking. He calls himself a “neo-hobo,” explaining with a laugh, “I’m sort of a hobo, but a classy hobo maybe.”

“The secret to life is having few things but having those few things be really special,” he says.

With that philosophy in mind, his home is filled with small treasures, ranging from photos of his family glued to a lampshade, to some hand-made gifts from his children, to his handpan, a steel drum he enjoys playing.

“Everything I do is a joy,” says Price, “and that is the way it ought to be.”

What is your reaction? Would you want to live this way? Share your thoughts in the section below:

Previous: A Homesteader’s Shocking Lesson About ‘Added Sugar’
Next: Sufficiency Of Scripture: The Bible’s Most Practical Teaching For People Today