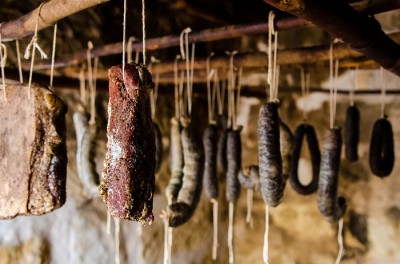 In the age of the Internet and microwaves, we tend to expect ease and instant gratification to be a perpetual way of life. We can buy a hundred pounds of meat, stick it in the freezer and eat off of it for a year without any special preparations or considerations made.

But what if the time comes when our modern conveniences are no longer available? Who among us could say that in the event of a catastrophe, we would be able to do what is necessary to maintain a hearty stock of food for ourselves and our families? Look ahead to a future in which unpredictable electrical blackouts make refrigeration impossible and the inflated prices of commodities make them unaffordable.

This article provides an introduction to the two easiest, most fool-proof techniques for preserving meat – curing and smoking – just like our ancestors did it. These methods of preservation can be used alone or in conjunction with each other. I’m going to give you some tips on curing and smoking meats as well as a little bit of insight as to how and why (even with the availability of refrigeration) it is a healthier option than freezing.

The process is basically the same for all different varieties of meats, although the recipes may differ slightly.

The process of curing is simply using the benefits of salt to preserve meat. Before refrigeration was available, curing was just about the only way to save up meat in warm weather months. Without salt, bacteria would grow in and on the meat and quickly cause it to go bad. The basic role of salt in curing is to dehydrate the meat just enough so that bacteria cannot thrive. However, even if you have the convenience of refrigeration, curing is a great way to preserve the natural flavors of the meat as well as to keep essential vitamins and minerals that are often lost in the freezer.

Do It Yourself With The ‘Complete Book of Butchering, Smoking, Curing, and Sausage Making’

There are two ways to salt-cure meat. In both cases, the flavor from the cure is derived from salt and whatever other flavors are added to the curing mixture such as sugars (honey or brown) and spices (pepper, rosemary, bay leaves)

One of the most important ingredients to include when preserving meats by curing is sodium nitrate. Sodium nitrate can be found in all kinds of leafy green vegetables and can be added to your salt mixture in the form of celery juice, ground spinach or pink salt (curing salt #1, which is 7 percent sodium nitrate). Sodium nitrate is useful for warding off the development of one of the worst kinds of bacteria found in food — botulism. Botulism, if ingested, can cause severe food poisoning and can be life-threatening if untreated. So we want to do everything we can to make sure that our cured meats are as safe as possible. Sodium nitrate will also make your cured meats turn a nice shade of bright reddish-pink. One thing to be mindful of, however, is that high levels of nitrates (like most anything) are toxic and you need to be careful about the amount that you are adding to your curing mixture. Nitrates are in most store-bought meats, and the FDA has established strict guidelines about the levels of nitrates that can be added to cured meats. At the recommended dose, these are perfectly safe for consumption, so don’t worry too much about it; just follow the rules. (Note: During the curing process, nitrate turns into nitrite.) Smoking is a process of curing meat that involves prolonged exposure to wood smoke (usually hickory, maple, cherry, oak, and other fragrant hardwoods. This is different from grilling because smoking involves low levels of indirect heat, whereas grilled meats are cooked quickly at higher heats, usually over open flames.

Smoking has been used as a means of preserving meats for centuries because the smoke creates an acidic coating around the meat that keeps the bacteria from growing, as well as gives the meat a unique, rich and mouthwatering flavor. Smoking also helps to dehydrate the meat, again changing the environment within the meat so that it is less hospitable for bacteria to thrive in. Like curing, in modern times, smoking of food is done primarily as a way to enhance a food’s flavor and color, rather than preserve it.

There are two types of smoking:

Smokers come in all shapes and sizes to fit your individual needs and are fueled by charcoal, electricity, gas, wood, etc., in order to generate smoke. Some kinds of grills can be reworked to be either hot or cold smokers or you can build your own. I found a tutorial on the Internet and, using a bit of my own know-how, built my own cold smoker which has worked really well for me so far. It was a lot cheaper than many of the store-bought versions. In any case, it is important to have some outdoor space to do your smoking.

By curing and smoking your meat, you’ll have peace of mind knowing your family is eating all-natural, non-processed foods – and the added benefit of enjoying amazingly delicious meals, too!

What smoking and curing tips do you have? Tell us in the section below:

Previous: Double Whammy: How California’s Drought Could Trigger ‘The Big One’
Next: Mom Arrested And Jailed For Letting Son Play At Park