Written by: Off The Grid News Staff Financial 9 Comments 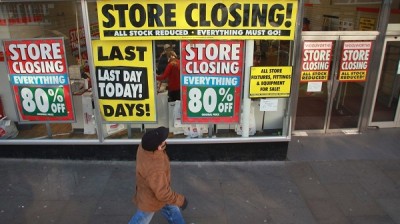 Hundreds of stores across the nation are closing as some of America’s most famous retailers struggle to stay in business.

The country is facing what CNBC has labeled a tsunami of store closings and blogger Michael Snyder has called a retail apocalypse.

Sears, K-Mart, Best Buy and JC Penney are among the big names in American retail that could disappear in the coming years, according to investment analysts. If or when these chains collapse, thousands of jobs and hundreds of millions of dollars in sales tax revenue will disappear.

“Shoppers will likely see an average decrease in overall retail square footage of between one-third and one-half within the next five to 10 years, as a shift to e-commerce brings with it fewer mall visits and a lesser need to keep inventory stocked in-store,” Burden told CNBC.

Shocking Numbers of the Retail Apocalypse

The numbers related to the “retail apocalypse” are staggering.

The scary statistics include:

Retail Apocalypse Will Get Worse

No new indoor shopping malls have been built in the United States since 2006, real estate executive Rick Caruso told CNBC.

He also said that many retailers are in much worse financial shape than many believe. To keep their shelves stocked, retailers such as Best Buy purchase goods on consignment. That is, a manufacturer ships items to the store that haven’t been paid for yet. The idea is that the goods will sell and generate enough revenue to pay the bill.

The problem with this arrangement is that if the goods don’t sell, the retailer still has to pay for them. If it cannot pay for the goods, the retailer may have to declare bankruptcy and shut down. That’s what happened to Circuit City.

Is the Middle Class Disappearing?

Another popular theory is the number of middle class people who make up the majority of these stores’ customers is falling. The New York Times recently found that businesses that sell to the rich are thriving while those that cater to the middle class such as Sears are floundering.

“As a retailer or restaurant chain, if you’re not at the really high level or the low level, that’s a tough place to be,” PricewaterhouseCoopers Analyst John G. Maxwell told The Times. “You don’t want to be stuck in the middle.”