The Day All The ATMs Ran Out Of Cash

Written by: Off The Grid News Staff Financial 11 Comments Money plays such an important role in our lives that most of us could not imagine surviving without it. Yet that is exactly what you need to do if you want to prepare for an economic condition called deflation.

Deflation is the term economists use to describe a “general decline in prices, often caused by a reduction in the supply of money or credit.”[1] A good way to think of deflation is as the opposite of inflation. Inflation occurs when there is too much money in circulation, which destroys its value and raises prices. When deflation occurs, there is too little money available, which often causes prices to collapse and the economy to shut down.

In severe cases of deflation there can be no money available at all not — even at the banks. This nightmare actually occurred during the Great Depression of the 1930s, when there were places in the United States where there was no cash available at all. More recently, it has happened in Greece, where ATMs ran out of cash and where banks placed limits on the amount of money that could be withdrawn.

The situation got so bad that in some areas of the country, local governments, chambers of commerce and businesses issued their own currencies — the so-called depression scrip. (See a picture of one here.) The scrip often took the form of pieces of paper that people used as money because there was no government currency available. The scrip was used to pay workers or buy goods.

At one point during the Great Depression, the money shortage got so severe that the US government considered issuing a national scrip as an alternative to the dollar. That plan was eventually dropped and the government solved the crisis by simply printing more dollars.[2]

Many people have known survivors of the Great Depression who liked to keep large amounts of cash on hand. Others would hoard food and other items. Those people developed that habit because they remembered what life without money was like. The fear of the deflation that occurred in the 1930s haunted them all of their lives.

The frightening reality is that the threat of deflation is still real. Some knowledgeable individuals, such as wealth preservation experts Will and Bill Bonner,[3] believe that a sudden deflation leading to a national or international money shortage is still possible today.

The Bonners, who have studied some of the world’s knowledgeable investors such as George Soros, believe that the next financial crisis will begin with a “violent monetary shock” similar to the one that occurred during the Great Depression. They predict that money could suddenly disappear overnight, causing the economy to come to a grinding halt.

What Happens When Money Vanishes

Historical accounts of the Great Depression show us some of the possible effects of such a violent monetary shock. The damage caused by such a violent deflation can include:

The sudden collapse of prices. The Great Depression began with the collapse of stock market prices in 1929. That was preceded by the collapse of agricultural prices in the United States during the 1920s. During that crisis, land prices in rural areas collapsed, causing large numbers of rural banks to fail. When the banks failed, the government liquidated them and their assets, which included lots of foreclosed farmland, an action that further drove prices and made the crisis worse.[4] Everything you have — your investments, your home and your possessions — could suddenly lose all of its value. We saw this happen during the mortgage bubble of 2007-2008, when many people found themselves “underwater.” That occurs when the amount a home is mortgaged for exceeds the property’s value.

The collapse in prices during the Great Depression particularly hurt farmers who relied on commodity prices. Newsreels from the early 1930s show farmers dumping grain on the ground and pouring out milk because they could not sell them.

Bank runs and the collapse of financial institutions. A bank run or banking panic occurs when all of a bank’s depositors try to take their money out at once. Bank runs often trigger the collapse of financial institutions, which prompts even more bank runs. Between 1930 and 1933 nearly 10,000 banks failed or were suspended.[5] The panic got so bad that President Franklin D. Roosevelt actually suspended all bank transactions in the US between March 6 and March 10, 1933 to prevent further runs in his so-called “bank holiday.”[6]

During the banking crisis of the 1930s, many Americans lost their life savings simply because they were not able to get to the bank fast enough and withdraw their money. Even some wealthy individuals ended up on the streets and in bread lines because they could not get money from the bank.

Massive unemployment. It is a simple and obvious fact that when there is no money, there are no jobs. At the height of the Great Depression in 1933, 24.75 percent of the nation’s labor force, or one in four workers, were unemployed. Around 12.83 million people were out of work at a time when America’s total population was only around 93 million people. That unemployment persisted for years, with 8.1 million Americans still out of work in 1940 in the 11th year of the Great Depression.[7] The unemployment created by the Depression only ended when World War II created “jobs” in the form of the draft and war production.

Hunger and Starvation. Not surprisingly, hunger and in some cases death from starvation can become a problem after deflation. Historians disagree on the number of people who died during the Great Depression. 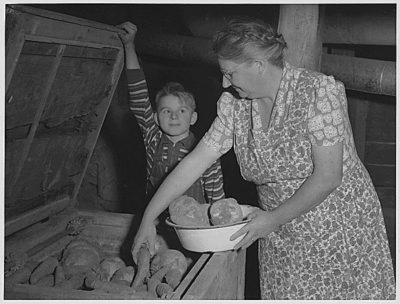 Increased taxation. When money disappears government gets desperate and imposes more and taxes in an attempt to squeeze more money out of the economy. During the Depression, the maximum income tax rate was raised from 20 percent to 55 percent, gift taxes were increased from .75 percent to 33.5 percent, and new taxes were levied on automobiles, gasoline, telegrams, telephone calls and even checks. By 1934, the United States had the highest tax rates in the world. In 1935 taxes were raised again. Historian Murray Rothbard estimates that the effective tax rate in the United States increased from 16 percent to 29 percent during the Depression.[11]

Why it Could Be Worse Today

If such an event were to occur in today’s world, it could be far worse than the Great Depression.

Today, most Americans rely solely on supermarkets for food, and many families no longer even cook. Few people bother to sew, and most of us do not even change the oil in our cars. If our money were to disappear, we would be as helpless as children.

It’s time that we learn the lessons of the Americans who survived the Great Depression. That lesson was to be as self-sufficient as possible so you can survive, no matter what.

Do you believe that what happened during the Great Depression could take place again? Share your thoughts in the section below:

Are You Ready For Blackouts When A Crisis Arrives? Read More Here.

Previous: He Built A Family-Of-Five Home For … $5,000
Next: 8 Overlooked Ways To Make Thousands Of Extra Dollars Homesteading