That Time The U.S. Government Told Every American To Stockpile – And No One Thought It Was Crazy 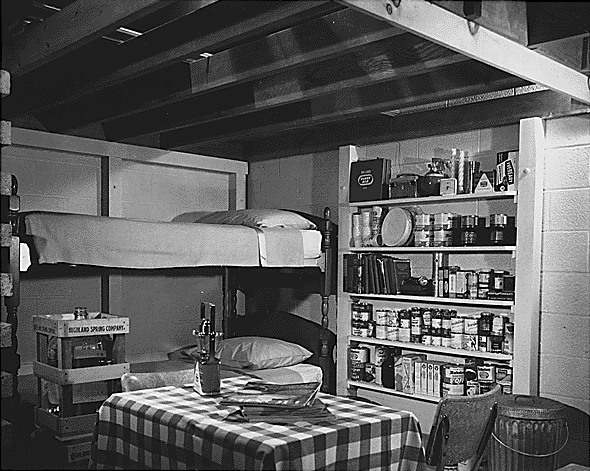 If you have seen photos of recently discovered backyard fallout shelters, you would agree that they look like fascinating time capsules from early 1960s America. We see packaged foods — such as breakfast cereals and crackers with labels that indicate a time gone by – along with first-aid supplies, tools, clothing and batteries. Cots, books and games are neatly placed on subterranean shelves.

You might think that the construction of such a shelter was the brainchild of only a few people who were concerned about heightening Cold War tensions and the possibility of nuclear war.  You would be wrong.

Fallout shelters were distinct from bomb shelters in that they were not to protect you from ground zero of a nuclear blast – which would be impossible – but from the widespread radioactive fallout that resulted from a blast.  Beginning with the Eisenhower administration, the government launched a program to convince private citizens to build fallout shelters in or near their homes.

One option was to create temporary shelter in your basement. Another was to build and stock an underground shelter in your backyard. At the time, citizens were encouraged to stockpile enough food and supplies for two weeks, since it was believed that the radiation levels from a nuclear explosion would drop to a safe level by that time.

New York’s Governor Nelson Rockefeller started a fallout shelter program in New York in 1960, and he urged newly elected President John F. Kennedy to do the same thing on a national level.

‘Lives … Can Still Be Saved’

“In May, I pledged a new start on Civil Defense. Last week, I assigned, on the recommendation of the Civil Defense Director, basic responsibility for this program to the Secretary of Defense, to make certain it is administered and coordinated with our continental defense efforts at the highest civilian level. Tomorrow, I am requesting of the Congress new funds for the following immediate objectives: to identify and mark space in existing structures—public and private—that could be used for fall-out shelters in case of attack; to stock those shelters with food, water, first-aid kits and other minimum essentials for survival; to increase their capacity; to improve our air-raid warning and fallout detection systems, including a new household warning system which is now under development; and to take other measures that will be effective at an early date to save millions of lives if needed.

“In the event of an attack, the lives of those families which are not hit in a nuclear blast and fire can still be saved — if they can be warned to take shelter and if that shelter is available. We owe that kind of insurance to our families — and to our country.”

The concept of the home fallout shelter was hotly debated throughout the country. Some people stated that that fallout shelters would be useless in protecting urban residents near ground zero of an attack. Others thought that the idea revealed weakness and was distinctly un-American.

However, the need for a basement or backyard shelter picked up steam for people living in suburban communities. By August 1961, a Gallup poll showed that 3 million families had made some home modifications for protection from nuclear attack, and another 9 million had stockpiled food.

Some builders reported being inundated with orders for supplies to build shelters. Office of Civil and Defense standards specified concrete or metal construction built under three feet of soil, two feet of concrete or three inches of lead. One company that made pre-fabricated shelters advertised that roof of its shelter could be used as “an attractive patio.” Some fallout shelter plans used a hand-cranked blower system for ventilation, and others had elaborate electrical systems and running water.

A home fallout shelter’s basic purpose was to reduce a family’s exposure to harmful fallout from a nuclear blast and its likely aftermath of radiation until radioactivity has dropped to a safer level. As a do-it-yourself project, a concrete block basement shelter could be built for about $200 in 1961.

Separate underground backyard shelters were more expensive. According to the National Archives and Records Administration records, Louis Severance built a fallout shelter near his Michigan home with a 10-inch reinforced concrete ceiling and thick earth cover and concrete walls. The Severance shelter featured a ventilation system, an escape hatch, an entrance to the home’s basement, a kitchen, running water, a toilet, and a sleeping and living area for the family of four. It cost roughly $1,000.

According to the Nebraska State Historical Society, Civil Defense agencies provided candies for use in shelters as “carbohydrate supplements,” and boxed crackers called “Nebraskits” also were available.

Don’t Forget Games in Your Shelter

The Office of Civil Defense recommended that people remain in a shelter for at least two weeks after a nuclear blast. Families with children were advised to stock games such as Monopoly, playing cards and journals to help pass the time.

The tense political climate and the government’s awareness of it are reflected in this 1962 public service radio announcement by the U.S. Department of Defense:

“This is basic civil defense information from the Department of Defense, Office of Civil Defense, Washington. If you receive warning of an enemy attack, get to the nearest fallout shelter promptly. But if you’re caught in the open, and there’s a brilliant nuclear flash in the distance, take cover immediately. Even miles away you may be exposed within seconds to a searing heat wave from the explosion, followed by a blast wave and flying debris.

“Get into the nearest building immediately or into a ditch or culvert, beneath a parked car, behind a tree or wall, anything solid that will give you some measure of protection. Curl up in a ball, and cover your head with your arms. Stay there until heat and blast waves have passed.

By the end 1962, some of the worst fears from the Bay of Pigs crisis in Cuba and from the tensions in Berlin had lessened. At the same time, scientists began publicly discussing the futility of a 14-day stay in a fallout shelter, noting that survivors of a nuclear attack would need to remain underground for months in order to avoid harmful after effects.

“When they stopped to think about the magnitude of the potential disaster, they realized that there wasn’t much they could do,” explains David Monteyne, author of Fallout Shelter: Designing for Civil Defense in the Cold War.

Looking back, it is fascinating to consider that the government actually encouraged its citizens to build fallout shelters and to stockpile. Yet even today, the US government still encourages Americans to keep a three-day stockpile. Even though a nuclear attack may not be as likely, other threats remain — and millions of Americans remain committed to preparing for an unknown future.

What do you remember, if anything, about the threat of the 1950s and 1960s? Share your thoughts in the section below:

Previous: 10 Survival Kit Items Every Pet Owner Needs
Next: Constitution Has ‘Absolutely No Value,’ Federal Judge Declares (You’ll Be Shocked Who Nominated Him)