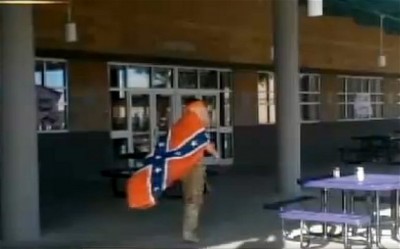 Redneck Day activities at an Arizona high school are being investigated by the US Department of Justice. A complaint was filed with Eric Holder’s agency after a Queen Creek High School student wore a Confederate flag during the Duck Dynasty-inspired day in May. Civil rights activists feel the flag wearing and theme day created a racially hostile environment.

High schools across the nation typically have these days during morale-boosting or spirit weeks. Students usually vote on the type of dress for each day and have a blast stepping away from the norm and wearing silly outfits during the highly anticipated annual events. Queen Creek Unified School District Superintendent Tom Lindsay told local media outlets that Redneck Day was supposed to satirize the Duck Dynasty television show and boost school spirit.

If the Confederate flag-wearing student on Redneck Day had made any derogatory racial comments, then the school should have punished him, but that was just not the case. While anyone who supports the idea of slavery is an extremely warped individual, we have to remember the Civil War was not fought solely to preserve the practice of human bondage.

Superintendent Lindsey also stated that the Queens Creek student who wore the Confederate flag was asked to changes his clothes. The Arizona school administrator said that “no ill intent” was envisioned when planning the Duck Dynasty day and apologized to anyone who was offended by the word “redneck.”

Southerners were not evil people and northerners were not angels. Like any group of people, they were a diverse lot. Many of the folks who lived in northern towns and vocally opposed slavery really did not want freed black people living in their neighborhoods or taking jobs away from whites and earning equal pay. Many southern folks fighting for states’s rights during the Civil War did not own nor believe in slavery. Robert E. Lee was not a supporter of slavery, yet William Tecumseh Sherman did not oppose the practice and once left a group of fleeing slaves at the mercy of slave hunters. The group of black men, women, and children followed behind Sherman’s troops in an attempt to reach freedom. The Union leader did not want soldiers sharing their dwindling rations with the group and feared the slaves would slow down the troop’s movements. When the Union troops reached a river, they used a makeshift wooden ferry to cross safely. Once all the soldiers and supplies were across the waterway, General William Tecumseh Sherman ordered the ferry ropes cut, leaving the black civilians who did not know how to swim waiting like sitting ducks for the slaver hunters. Dozens of the slaves drowned when attempting to swim across the water to escape capture and the harsh punishment they knew would follow.

Phoenix civil rights attorney Steve Montoya called the Duck Dynasty Redneck Day/Confederate flag incident a “direct attack on African Americans.” Maricopa County NAACP President Reverend Oscar Tillman said the school is supposed to show people “where we come from, our history, and to try not to go back to some things.”

Holy Trinity Community AME Church Reverend and East Valley NAACP Chapter Vice President Ozetta Kirby was upset by Duck Dynasty Redneck Day and had this to say about the wearing of the Confederate flag:

“I’m sitting here crying and praying. This thing really got to Marcus [teenage grandson] when you’re in 11th grade, that can break you down and make you feel at the bottom rung of the whole society, where everybody is being jubilant. No kid should have to go through that. We all know the connotation of ‘redneck.’”

The term “redneck” would likely be more offensive to the white rural kids than anyone else in the school. I live in a rural area and we absolutely do not like it when people in nearby cities toss the term around. When an individual from our community might say, “don’t be a redneck” to another resident, it is done in jest and taken from an entirely different perspective.

During an away high school basketball game a few years ago the city kids in the student cheering section dressed up in redneck garb and taunted our boys loudly throughout the game. The derogatory chants did not go over well, and it likely made the boys play even harder and made their smiles all that much broader when they huddled in the middle of the gym floor to celebrate the win at the end of the game. Life is not fair and everyone will not be kind, and those boys learned a lesson of working through adversity.

The city kids were rude and behaved in a demeaning way, but their free speech rights were respected. Shielding children from every possible upset prevents them from developing the coping mechanisms necessary for adulthood. If the federal government can thwart First Amendment privileges simply because an individual or particular group is offended by the expression, freedom of speech is dead in America. I find paintings mocking Christianity and using excrement in living art displays extremely offensive, but I live in the United States and support the right of my fellow citizens to be vile idiots.

The Confederate flag is a source of pride for many southerners; to them it represents the heritage of the region. The mere act of displaying or adorning oneself in a Confederate flag should not warrant an investigation by the Department of Justice. While Attorney General Eric Holder’s staff did acknowledge that the Redneck Day/Confederate flag incident is partially a First Amendment free speech issue, they are still looking into whether or not a “racially hostile environment” was prompted by the Arizona high school student’s choice of costume. If the Department of Justice decides that the Confederate flag constituted the wearing of stereotypical clothing that could be viewed as offensive, legal sanctions will be forthcoming.

The Confederate flag-wearing student is from a state where displaying the stars and bars is more commonplace, according to school officials. The Queens Creek Unified School District superintendent reports that, when the removal request was made, staffers explained to the student that the Confederate Flag was viewed “differently” in Arizona.

First Amendment rights should not fluctuate depending upon which part of America you are standing in.