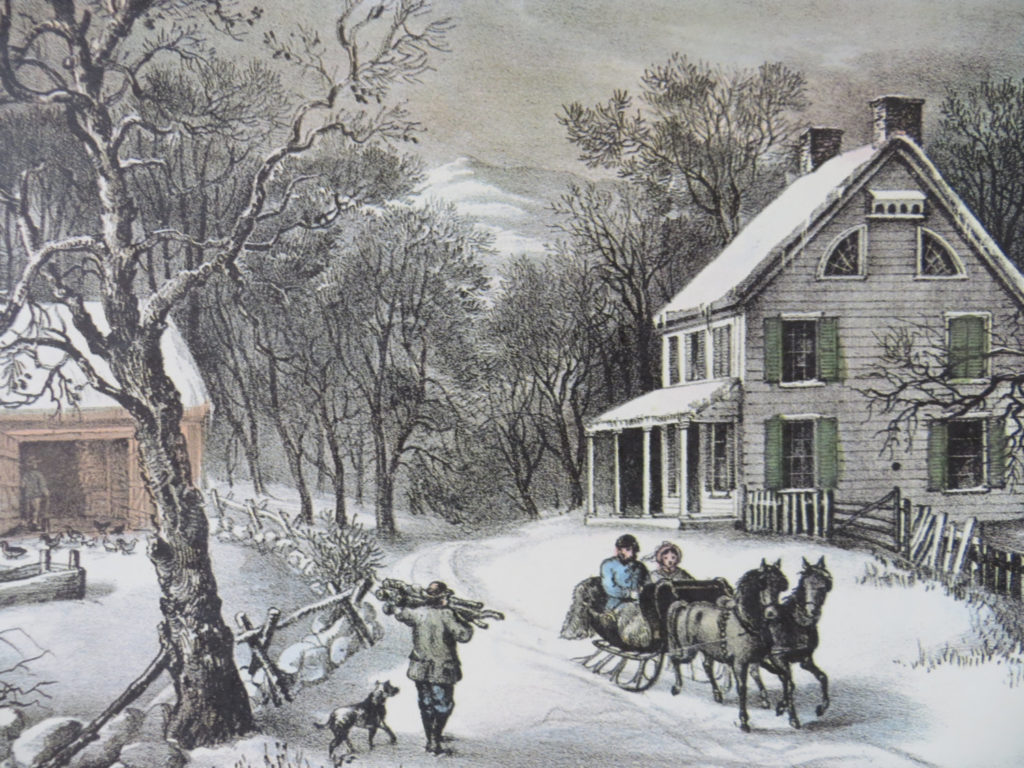 Life was hard for our ancestors — much harder than it is for us today. Most of them didn’t have running water and electricity to make their lives easier. These modern conveniences have changed our way of life, to the point where we often forget what people had to do throughout history in order to survive.

We look at survival today as something needed in a time of emergency, but to many of them, survival stared them in the face every day of their lives. That was especially true in the wintertime, when it wasn’t possible to glean what you needed from nature. Basically, if you weren’t ready for winter, you didn’t survive.

So our ancestors all became experts in stockpiling. They’d spend the warmer months preparing, so that when the cold winter months came around, they’d be ready. You could tell a lot about a family’s wealth and industry by that, as there were those who struggled through the winter and those who didn’t.

I remember my grandmother, who lived though the Great Depression. She was a hoarder if you ever saw one. While her home wasn’t one you’d expect to find on one of those reality shows where they dig through a house filled with junk, she didn’t let things go to waste. If there was any utility she could get out of something, it didn’t go to the trash; it was saved for that proverbial rainy day.

Not everyone saved all the things that my grandmother did, but I imagine a fair percentage of those who lived through the Depression did. Even those who didn’t knew the importance of stockpiling for winter. The idea of “saving up for a rainy day” wasn’t just a figure of speech — it was a way of life.

So, what did they stockpile? Let’s take a look.

Of course, the most important thing to stockpile for winter was food. Everyone would “put up” food — canning, smoking and drying it. The modern grocery store is actually rather new, with the first real supermarkets opening exactly a century ago. Before that, you could buy foodstuffs from the general store, a local butcher or a local greengrocer (produce only). But there weren’t grocery stores as we know them.

Feeding yourself wasn’t enough in those days. You needed to be able to feed your livestock, as well. Even people living in the city had to take this into consideration, as many had horses and wagons.

Early garages weren’t attached to homes, because they were converted barns and stables. Before the automobile became common, that’s how people moved around. So, they’d have a stable behind the home and had to make sure the loft was filled with hay and grain to feed their horses. Granted, they always didn’t harvest that themselves, but they still had to buy it and stockpile it to take care of their horses.

If that hay and feed was the “fuel” for their transportation back then, and they stockpiled it to get through the winter, perhaps we should follow suit. While our modern cars won’t run well off of hay, few of us have enough fuel to keep them running for more than a day or two. In a blizzard or power outage, that could prove to be a costly mistake. (Click here to learn how to stockpile gasoline.) Cutting wood for the fire in the wintertime is much more difficult than it is in the summertime. So our ancestors needed to take advantage of the warmer weather to cut their wood and stack it for winter. Granted, living in the city made that hard for some, but cities were smaller back then. They could still take a wagon out to the country to cut wood, if they didn’t want to pay someone for it.

It would take several cords of wood to make it through the average winter, and – prior to electricity — there wasn’t any other option. That is, unless you happened to live in an area where you could heat with coal. Coal produced much more heat per ton than firewood did, making it a great improvement; but you couldn’t cut or mine it yourself.

In addition to the firewood, our ancestors always made sure they had a good stock of tinder. It’s all but impossible to find anything that can be used as tinder in the wintertime. So, most families filled up their home’s tinderbox to overflowing during the warmer months. That way, they could always start a fire if it went out.

Keeping a home warm was difficult, especially a larger home with lots of rooms. Few actually could afford a fireplace in every room, even if they wanted one. So they’d heat the main living area of the home and leave the doors open to the bedrooms. Whatever heat managed to make its way in there was all that they’d get.

Since they didn’t have much heat in the bedrooms, they counted on body heat to keep them warm at night. That was part of the reason why kids would sleep together — so that they could keep each other warm.

But the other thing they did was pile blankets high upon the beds. It wasn’t uncommon to have a chest at the foot of the bed, which was used to store these extra blankets in warmer weather. Then, in the wintertime, they’d be brought out and piled on the bed. A good quilt was laid on top to make it all look good.

That’s part of why goose down quilts were so popular. Not only are they warm, but they don’t weigh a ton. It’s much nicer to bury yourself under a couple of goose down quilts than to have the weight of six wool blankets on you all night long. So save those goose feathers; it’s time to make another quilt.

Most people kept a pretty good supply of medicines in the home — not the medicines that you can buy over the counter in the drug store, but home remedies. Doctors weren’t all that common. Some communities only had a visiting doctor come by a couple of times a year when he was making his circuit. So, they needed to be ready to take care of themselves. That’s why home remedies were so important. When that’s all you’ve got, you want to make sure you don’t run out.

Candle making was a summertime activity. You had to make them when the bees were active, collecting pollen and making honey. That meant you made them during the warmer months, when there were lots of flowers in the fields and on the trees. In the winter, bees stay in their hives, living off the honey they stored up in summer.

Harvesting honey, for those who had hives, also meant harvesting the beeswax. That meant it was time to make candles. While some were made by professional candle makers, it wasn’t uncommon for people to make their own, especially those in rural communities. Those candles would have to be enough to get them through the winter.

Wintertime was a time to stay indoors as much as possible. The harvest was in and it was too early to think about plowing for spring. So, people would work inside the home, repairing harnesses, sewing clothes and reading. Few had time to read during warm weather, as the work on the farm kept them going from “can see” to “can’t see,” but in the wintertime, gathered around the warmth of the fire, reading was common.

People would literally save magazines and newspapers for months, waiting until wintertime to read them. While that would make the news a bit out of date, life didn’t move as fast back then. News was slow to get to rural communities anyway, especially out West. So, winter made a good time to catch up.