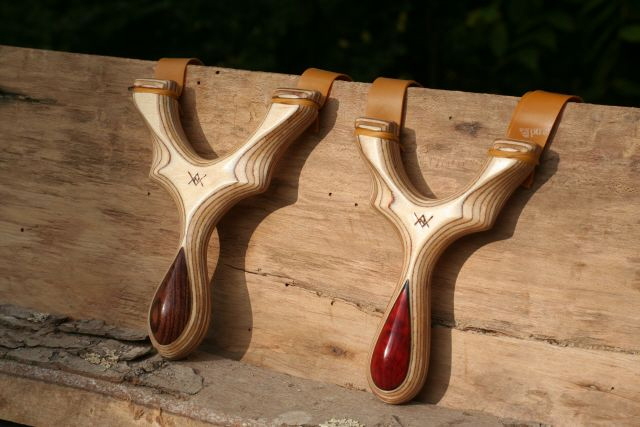 When I was a kid, one thing that I looked forward to with great anticipation was traveling to visit my grandparents. I clearly recall that my grandfather would often set aside time from his fishing excursions to search out and then cut the perfect, forked, tree branch so that he could make a new slingshot, which he would then give to me as a present.

However, those early slingshots were actually very primitive compared to some of the models available today, since they had forked sticks for handles and power bands made from strips of black rubber cut from a car tire’s innertube. Then, some years after that, I laid eyes on the first wrist-braced slingshot I had ever seen, made by a toy company called Wham-O which had a wrist brace, a handle, and forks made from tubular aluminum with tubular latex power bands. Thus, not only was it considerably more powerful than the ones my grandfather made, but it was also significantly easier to draw due to the wrist brace.

Since then, slingshot technology has continued to progress to the point where there are now numerous manufacturers in the market today and some of them are producing models that look like something from a science fiction movie. However, regardless of whether you choose to purchase a basic model with a single pair of power bands or one of the ultramodern designs with three or even four pairs of power bands, slingshots are an excellent tool for wilderness survival hunting.

The Judge: The Slingshot For Hunting AND Self-Defense!

It should be noted that most companies produce models both with, and without, wrist braces but, those without wrist braces tend to be more difficult to draw and shoot accurately — unless you happen to have an exceptionally strong wrist. Therefore, the ones with wrist braces are often a far better choice.

But why would a person want to use a slingshot for wilderness survival hunting, you might ask? Well, the answer to that is because they are relatively lightweight and quite compact and thus, are very easy to carry. The ammunition for them also is relatively inexpensive. Additionally, they generate plenty of kinetic energy for hunting small game species such as small birds, squirrels and rabbits. Plus, they are extremely quiet to shoot.

Some manufacturers also sell steel ball bearings of various sizes as well as white glass marbles which they dub “tracer” ammo, because it is easy to the human eye to follow them all of the way to the target. However, most big box stores also sell bags of standard glass marbles in the toy department which are often significantly cheaper than the so called “tracer” ammo. Another viable option it to purchase lead buckshot in sizes 4 (0.24 diameter) or 00 (0.33 diameter) in 5-pound boxes from a shooters supply such as Midway. They make excellent ammo for hunting game such as squirrels and rabbits, since lead is significantly denser than steel and it delivers more kinetic energy for deeper penetration.

For hunting small birds such as songbirds and waterfowl, the leather pouch of a slingshot can be loaded with a small number of either steel BBs or lead shot in sizes 4, 5, or 6 for a shotgun-like effect that makes if far easier to hit a moving target.

Thus, a person can purchase a slingshot for less than a rifle, carry it with ease and hunt both small game species and birds in a wilderness survival situation, obtaining much-needed protein for continued good health. Ammunition for them is also cheap. The modern slingshot just might be the perfect wilderness survival hunting tool.

5 Easy-To-Find Small Animals You Can Eat For Survival

Have you ever hunted with a slingshot? What advice would you add? Share it in the section below:

Previous: 6 Simple Survival Skills You Should Learn In 2016
Next: Homestead Chickens 101: What You Need To Know To Get Started