Can You Really Defend Your Home With Just A Slingshot? Would any burglar enjoy a face full of ball-bearings at point blank range?

Is it possible to defend your home with just a slingshot? Before you say “no way” think about how powerful a slingshot truly is.

The last time most of us picked up a slingshot was when we were kids. Before we were entrusted with firearms, we roamed the world with our slingshots, ready to take on any challenge. Some of us even learned to hunt small game such as rabbits, squirrels and birds, but quickly set the slingshot aside after gaining access to guns. Perhaps in our maturity we have become too quick to dismiss the slingshot as merely a kid’s toy. It’s time to take another look at this classic tool.

There are three basic versions of the slingshot in existence. The first is the ancient sling used by David in the biblical story. It consists of a leather pouch and a bit of rope or leather. A stone is placed in the pouch and the sling is spun over one’s head to build momentum. When one end of the cord is released, the stone is sent on its way at a high velocity. Slingshots of this type are the most powerful, easiest to construct and also the most difficult to use.

The next modern evolution used a piece of rubber suspended between a Y shaped support. This is the slingshot most associated with children’s toys and is simple to build. Unfortunately, slingshots of this type do not generate much force and are not terribly useful in a survival situation.

Defend Your Home With Just A Slingshot?

Modern technology has given us the final version of the slingshot. This type is an improvement on the Y design, adding a wrist support to allow you to generate more power. Stronger bands also aid in the generation of velocity. These types can be found in folding models and can even include front stabilizers to make aiming easier. Though not quite as powerful as the traditional sling, these “wrist rocket” slingshots produce sufficient velocity to easily kill or incapacitate small game and cause serious injury to humans. You can buy a slingshot like this in most sports supply stores for around $20.

As kids, the perfect slingshot projectile was a rounded stone. As an adult you have several better options. Ball bearings are the best ammo. These small steel balls fly straight and true and can be launched at an extremely high velocity. As a substitute, lead fishing weights can be used. It’s also easy to form lead projectiles from any piece of salvaged lead by melting it down over a campfire and pouring it into an improvised mold. Any other hard object, such as marbles, can be used in a pinch, though their flight might not be as true. The good, old fashioned stone can also be used if necessary, with an unlimited supply.

Slingshots require a little practice to use effectively. A few hours spent in the backyard shooting at a cardboard target should provide you with the skill you need. Please avoid the temptation to take a quick practice shot at the neighbor’s cat.

Firearms are the first choice for hunting, but they are not always available or practical. Often noise is a concern and the slingshot will allow you to secure food without announcing your location. If ammunition is in limited supply, you won’t want to waste it on small game when you can use another method. And never forget that using a gun to defend your home could land you in a heap of trouble.

Additionally, for many of us, there will likely be children or others present who may not be prepared to use a firearm effectively. A slingshot gives them a great, non-lethal weapon. If you have a few kids or other people who are not comfortable with firearms, but they have a slingshot in hand and a handful of ball bearings, you’ve assembled a formidable self-defense force. Imagine some thug with a knife or a pistol facing down a family where every member has a slingshot and can encircle him, if necessary?

The danger may not even come from a street thug; it could be a pack of ravenous dogs. A young person otherwise undefended would be an easy target for a formerly domesticated animal that hasn’t eaten in weeks, but a kid with a pocketful of ball bearings can ward off a number of animals and give them reason to move on.

Don’t dismiss out of hand the slingshot as a little boys’ toy. It is an inexpensive and versatile addition to your survival stockpile. After all, if the slingshot was good enough for David, who are we to dismiss it?

You really can defend your home with just a slingshot. Just lock and load.

You may also be interested in reading, Eat Those Varmints:  3 Nuisance Animals that Make Tasty Meals. 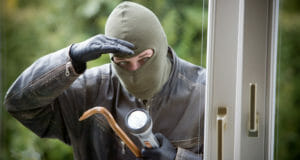