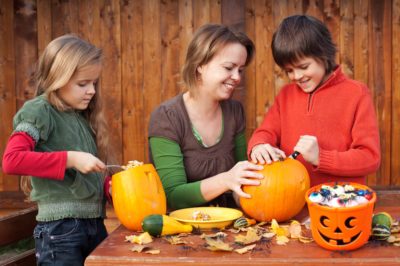 Pumpkin carving injuries are simply one of the many dangers that the CPSC is using your tax dollars to warn you about.

Furthermore, the CPSC has issued a warning list of jack-o-lantern dangers. The dangers include “lacerations related to pumpkin carving,” for instance.

The Federal Government Is Protecting You From Pumpkin Carving Injuries

The CPSC is so concerned about pumpkin carving injuries that it created a warning poster. However, the poster looks more like an advertisement for a slasher movie than a safety warning.

To emphasize the danger from pumpkin carving injuries, the poster says “Pumpkin Laceration: Chapter Seven.” In addition, it states, “any cut could be the deepest.”

Conversely, fake jack-o-lanterns could be a bigger safety risk than pumpkin carving injuries. The CPSC admits that Pier 1 Imports recalled thousands of decorative pumpkins because they were a laceration hazard. In other words, the “safe alternative” to traditional jack-o-lanterns is also dangerous.

Federal Agency Wants You To Avoid “Hatchet Job” To Your Fingers

Additionally, the CPSC has a website dedicated to preventing pumpkin carving injuries. Notwithstanding, the website provides very little information about jack-o-lantern safety.

The website cautions parents against letting young children use knives. It also advises parents to let kids draw on pumpkins with crayons instead of carving.

“Keep the sharp tools in adult hands,” the website advises. Particularly, the Commission wants to keep you from “doing a hatchet job to your fingers.”

The Commission believes that jack-o-lanterns are a fire hazard as well. Specifically, its press release alerts parents to the danger of “candle flames from jack-o-lanterns.”

For example, the CPSC’s experts fear that trick-or-treaters will set themselves on fire by brushing against a jack-o-lantern. Notably, the CPSC press release lists no examples of injuries from jack-o-lantern fires.

Moreover, the CPSC warns parents to make Halloween costumes from fire-resistant materials. The Commission cautions against costumes with “baggy sleeves” and “billowing skirts.”

Likewise, the CPSC’s jack-o-lantern safety page recommends that you use flashlights instead of candles in pumpkins.

All in all, pumpkin carving injuries are just one of many holiday dangers the CPSC wants to protect you from.

In the same fashion, the agency created a video showing the dangers of turkey fryer fires. To explain, a turkey fryer is a big pot filled with peanut oil which is used to deep-fry turkeys. Deep-fried turkey is supposedly a Thanksgiving delicacy in the South.

To demonstrate the danger, the video shows a turkey fryer exploding into flames.

On the negative side, pumpkin carving injuries are simply one of the many dangers that the CPSC is using your tax dollars to warn you about. For instance, the Commission is reportedly preparing warnings about Christmas tree fires.

On the positive side, the CPSC is providing sensible safety advice. However, there is no evidence that most people are even made aware of its warnings.

You may also enjoy reading an additional Off The Grid News article: 10 Unique Off-Grid Ways You Can Use A Pumpkin This Fall

What do you think about the government’s attempt to protect Americans from pumpkin carving injuries? Let us know in the comments below.

Previous: Restaurant Apps Collect Your Data For Big Money
Next: Herbicide Use Is Changing Your Food Completely