What The Bible Really Says About Guns And Self-Defense 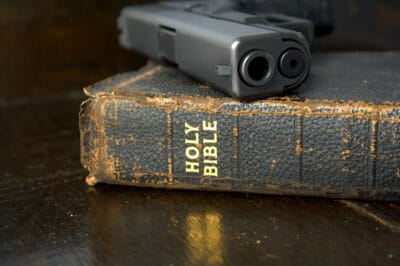 Few pastors even know what the Bible says about guns and self-defense.

What the Bible says about guns and self-defense is not well known or well understood even by Christians today.

From a Biblical perspective, we have to ask ourselves, how much time, money and energy should government on spend on attempting to eliminate crime? Alternatively, how much time should the civil government spend on denying Americans the right to protect themselves? If you’re a Christian, your first instinct should be to go back to God’s word for answers. So, let’s start there and see what the Bible says about self-defense so we can draw some insight into today’s gun control conversation.

The first murder recorded in the Bible occurs in Genesis 4, where Cain kills his brother Abel. What weapon Cain used is not specified. He may have used his hands, or perhaps a rock, knife, club or spear.

How does a sovereign God, who wields all authority at all times, respond to the first murder? Well, to begin with, God doesn’t assign blame to the weapon.

God doesn’t outlaw “weapons” for Adam and his progeny after this crime.

God doesn’t require Adan and his progeny to register any natural or man-made weapon in their possession.

God also doesn’t implement background checks on Adam and his progeny who wants to get a knife, a club or pointed stick.

Instead, in His eternal wisdom, God focuses on dealing with the criminal rather than the murder weapon. He banishes Cain from the land of his father. Remember, the penalty for murder since the beginning has always been death or in Cains case, removal from the community (banishment).

Important Note: Adam didn’t have God’s authority to execute a family member and there was no civil authority or magistrate in place at this time to prosecute or execute a guilty criminal. The result? Removal or banishment in Cain’s case.

As Governments around the world have forgotten God today, they have also forgotten how his word deals with both criminals and victims.  Further, government prosecutors in our legal system today seem almost desperate to demand background checks for law-abiding citizens and prosecute gun owners for defending their families.

Because we live in a truly fallen world, our civil government has, perhaps quite naturally turned its priorities upside down. Christ encountered similar challenges. In Mark 7 and Matthew 15, Jesus accuses the Pharisees of opposing the execution of rebellious teenagers ( yes the bible has such a category) who deserved the death sentence according to scripture. The religious leaders during that time replaced God’s commandments with man-made traditions just like our lawmakers continue to do today.

All this to say that it doesn’t make any sense to ban gun ownership or even declare gun-free school zones if we aren’t teaching the Biblical approach to changed hearts and self-government.  What’s the definition of insanity? Well, they say its keep making the same mistakes over and over, thinking you’ll eventually have a different outcome.  So let’s stop and learn Christ’s from reprimand of religious leaders who replaced God’s laws with their self-serving traditions.

Again, you would be hard-pressed to find anything in the Bible about guns, knives, rocks and clubs going to heaven or hell.  That’s why it’s ridiculous to think physical objects such as guns and knives can be prosecuted for any offense. That’s left for the guilty.

If we were to follow this principle today, there would also be no need for lawsuits against gun manufacturers unless the gun malfunctioned as a result of a manufacturing defect  That said, gun owners do have specific responsibilities before God and man.  As a gun owner, for example, you should be liable for damages if, out of negligence, you left your firearm unprotected in such a way that led to a child finding it and misusing the weapon. That’s why it’s essential to keep a gun in a secure place to avoid accidents. However, pretending to prevent accidents by denying the right of gun owners to protect themselves and their families against criminal attacks are very different things.

Remember, the Bible is a big book and says a lot of things. If you don’t know what the Bible really says about self-defense and how that relates to gun use, you’d be wise to study the entire Bible and not merely “proof text” your way to making an idealistic, political point. You’ll do all of us, believers and unbelievers, a tremendous favor.

Worse yet, you could write an article like this and pass it off as Christian teaching. It’s not. It is using the Bible to propagandize by citing a few passages that make the author feel good, all while ignoring the greater corpus of God’s word.

I interviewed Constitutional scholar John Eidsmoe a while back on the subject. The subject: what the Bible says about guns and self-defense  Might be worth listening to again.

Previous: 8 Perennial Vegetables You Only Need To Plant Once
Next: Smith Wesson Model 19 Is One Of 5 Classic Guns Your Grandfather Owned